All that's left to do is to put the data together - specifically the data that will be beneficial in the moment-to-moment campaign.

By the way, I never did explain about the 24hr average temperature.  That comes in handy because there are holes in the station research - many of the stations do not have a minimum/maximum average listed.  Palmyra, for instance.  However, by comparing Palmyra's 24hr average with another nearby station with that data, we can reasonably estimate Palmyra's own min/max averages.  For those of you who may be thinking about using data from the climate database (in accordance with this comment), use stations where both a minimum and maximum average is available.  Also, many stations don't include rainfall.   That will mean that has to be guesstimated by me also, or else found on the internet from another source.

Where are we, then?  We have the complete information for the four stations surrounding Palmyra (or wherever) that we need to create four different air masses converging on Palmyra.  That was last discussed when we talked about winds and other trends.

Obviously, the party on the ground cannot experience all these masses at the same time, so what do we do?  Rather than try to produce a conglomerated wind pattern (which would take a lot of time and not be especially useful for play), we can roll a d4 to determine which of the four generated conditions the party is experiencing at this moment.

Yes, I understand, that seems horribly random.  We've gone this distance and it would seem that all four wind shear patterns ought to be reflected.  I agree.  So bear with me for a minute and I'll explain.

Oh, and I should address those who will be thinking that the conditions to the east, north, south and west ought to reflect the player's position compared to Palmyra.  To that I say that weather shifts and moves about a great deal more than that; besides, Palmyra is in the center of a general area - it doesn't represent a fixed point past which the weather changes like crossing a boundary.

For the present incarnation, I intend to use the d4 to determine which weather conditions apply to the party, when they're in the climate area defined as the Palmyra province (we must call these areas something).  However, at some future point we can construct a windrose for Palmyra (and everywhere else) that will indicate prevailing winds in the area (even broken down by specific seasons).  In that event, one of the adjoining stations will send conditions to Palmyra more often than others - so that it might eventually be a d20, with Hama being 1-2, Deir Ezzor being 3-7, Rutbah being 8-12 and Irwaished being 13-20.  Or some other combination.  That way, the random number would favor the most common prevailing direction of the wind, not just for Palmyra but imaginatively throughout the whole system.

Very well, suppose we show what the final results look like.  For this, I'm going to take a screen shot of the excel page as well, to make it easier for readers to find what they want when finding the program on the wiki. 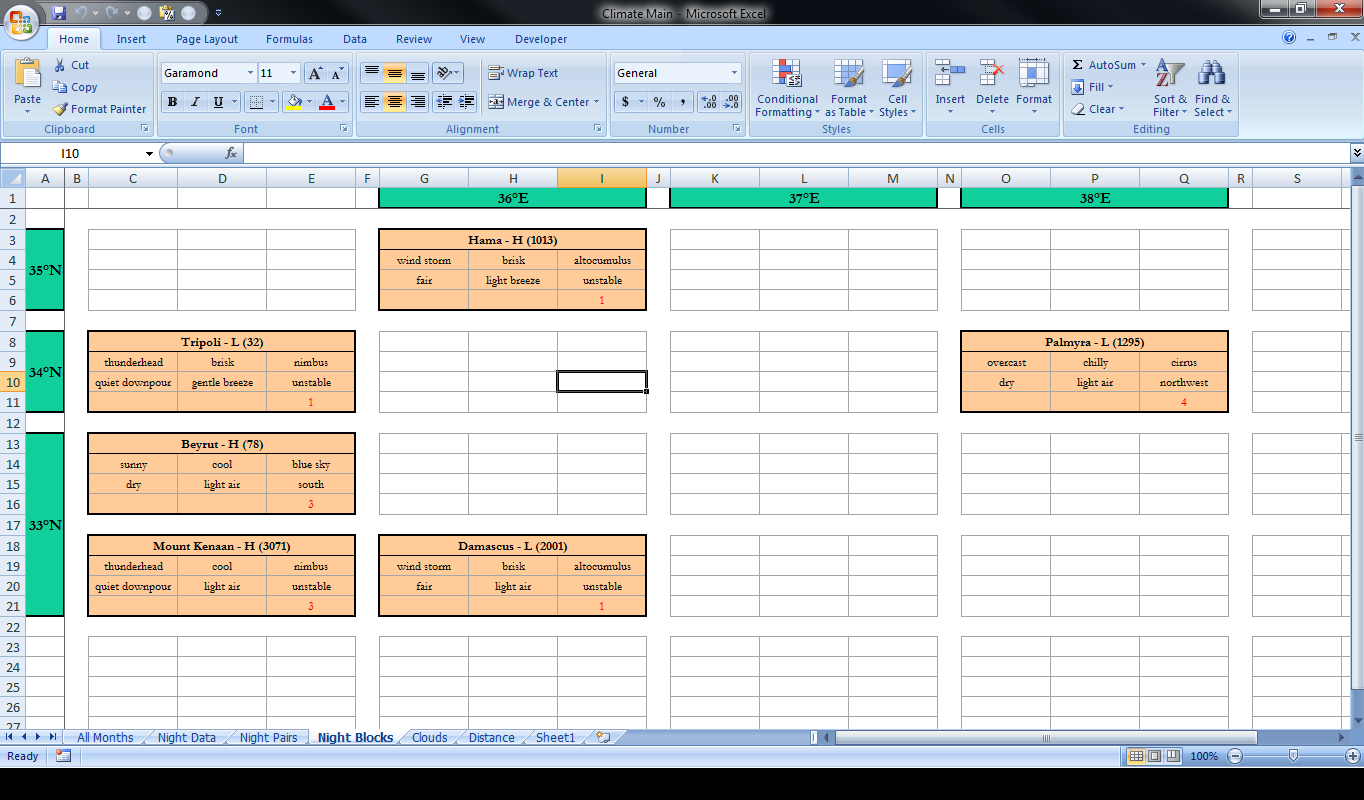 At present, the program has a feature that will allow any month to be selected.  That would be cell B1 on the Night Data sheet.  I need to spend a little time making another feature that will set the generator at 'Day' or 'Night.'  At present, the worksheets are called 'Night Data,' 'Night Pairs' and 'Night Blocks' to remind me that I haven't done that yet.  I'm afraid that means, at this point, that only night data is being generated.  It's not a difficult fix, but my concern has been elsewhere.

The 'Blocks' page, then, shows the final details we want.  (I added two more stations last night, anticipating my player's journey beginning this Saturday towards Egypt).  The boxes in green indicates the latitude (on the side) and longitude (at the top).  Eventually, the page data will be expanded as I add more stations.

That is a great part of the benefit of this system.  I don't have to include ALL the stations for it to work.  This means I can work on stations that are relative to the party, slowly building up the content until, like my maps, it covers a huge area.

It also means that if there are nine stations in a small area, I can always get by with doing one or two for the time being, ignoring the others until greater accuracy becomes important.  North of Damascus, for example, is a place called Rayack; if the players pass through Rayack, I can still use the data from Damascus.  Given that most campaigns have NO such data, this is still a great improvement - and it means I don't have to kill myself doing weather tables ad nauseum.  I can do what I need and the system does not suffer.

It means that if you want to use something like this for your world, stealing appropriate data from wherever (the North Kingdom in Greyhawk is a lot like Labrador, say), you don't have to grab hundreds of different stations.  You can actually get along with a minimum of five - then add a few more each time you want to expand your party's range!  The data showing in the above image required the data from just 16 stations.

What do we have, then?  Mount Keenan and Tripoli are each experiencing a quiet downpour, but Beyrut between them is sunny and dry (squall line).  There's a wind storm blowing across Damascus and Hama, but Palmyra is overcast with cirrus clouds.

The temperature is cool in Beyrut and Mt. Keenan, brisk in Tripoli, Hama and Damascus and chilly in Palmyra (just above freezing).  The wind is blowing from the northwest in Palmyra (probably the edge of the cyclone emerging from that windstorm to Palmyra's west) and is unstable everywhere else but Beyrut, where the wind is blowing gently from the south (a light air).  That wind 'storm' in Damascus isn't very strong (the 'eye'), but perhaps it is high in the atmosphere.

All this I get at a glance.

I've left open spaces on the blocks for other details that I will add later (appearance of a tornado, for instance) - and the size of the blocks can be expanded.

When I fix that day/night thing, I'll be sure to repost the program.  In the meantime, I hope the reader has some fun with it.  I'm going to move onto something else (though I will still be working on weather for myself), probably working on the wiki and working towards implementing wilderness damage.  Now that I have a working weather table, I can get right on that.

That's why I pushed to make this thing, after all.

Scratch one problem.  A day/night tab has been placed on the file.  Forgot to change the worksheet tab names, however.  Oh well.  I'll do it later.  Be sure to download the file named "2015 Climate Generator" for the right version.
Posted by Alexis Smolensk at Friday, April 10, 2015

Email ThisBlogThis!Share to TwitterShare to FacebookShare to Pinterest
Labels: Weather

I have greatly enjoyed these articles, and will have fun working through their implementation and then expanding them.

Also, I look forward to your wilderness damage setup, as I have finished mine but it feels off for some reason.

Alexis, thanks. Even as a first step you are correct, this is much better than what I currently have available. I look forward to downloading from home and playing around with this soon during a week night.

I just implemented your Mark 6 Weather System in a tropical rainforest climate (Kuala Lumpur to be exact), a location of homogenous high temperature & high precipitation, with surrounding seas.
Sadly, it does not deliver the frequency of precipitation it should (with 200+ mm in December in each station and 20+ days are rainy).

Rain only appear if I get Thunderhead or Rain Clouds. Which means HL or HM. However, at night chances are higher to have Low Masses, and at day High Masses (2/3 chances, M Masses nonwithstanding). So HL/HM has roughly 1/3 * 2/3 = 2/9 chances of happening.

For what I understand, the "chance" of having a potentially rainy situation is based on temperature alone, with the Precipitation only used to decide if the potential is realized.

I think that Precipitation should have a secondary impact on the Clouds. Either :
* High Precipitation (higher than 100mm ?) could add a chance to "upgrade" a set Clouds situation to a more rain-worthy one.
* The Clouds calculation could go further than the 15/30/60 range currently in use.

What do you think ?

Sure. Whatever you think best. I haven't looked at that system since 2015; right now, you're more of an expert on it than I am. It's best if you change the system to fit your needs, and use it to build a better system of your own.