This is an Important Game Mechanic 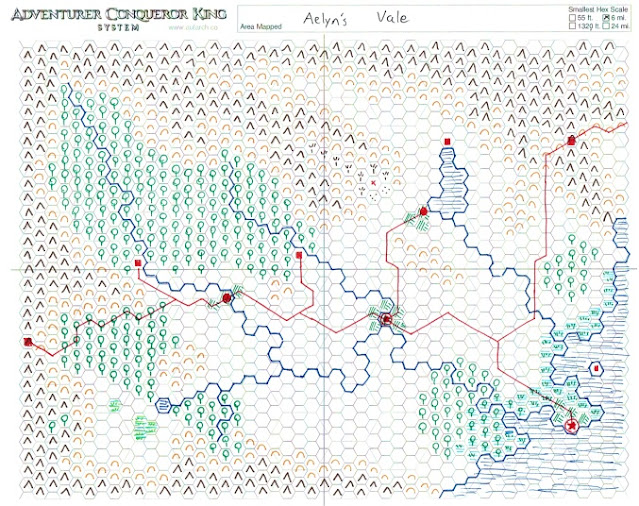 "That's the GM's Regional Map from my AOWG.  And it's a damned good regional map.  It's not a good map for a Simple Homebrew Campaign.  It does some s$&% wrong.  I just want you to see what it looks like.  Also, ignore the fact that it's got no labels.  Pretend I labeled things.

"A GM's Regional Map is precise.  A GM can — within three miles — plot the exact position of any f$&%ing thing anywhere in the world.  A GM's Regional Map is mechanical.  The world's broken down into chunks.  Spaces.  Six-mile hexes in this case.  Thus a GM can easily plot movement and resolve actions without doing a lot of measuring and math.  And that's important because the GM's Regional Map — along with a few supplemental notes — is used for running games.  For adjudicating travel actions.  It's for running games.  At the table.  Not for looking at."

I'm not going to rant.

Dear Reader, please take your time and look at the above's construction.  Consider each sentence individually.  Evaluate what it says.  Decide if it says anything.

Informed Ability is a TV trope wherein a writer stresses the ability of a character or a thing excessively in an effort to make the viewer believe that by repeating these things the overall idea will be accepted as true.  For example, if every cast member in at least half the TNG episodes tells us that Riker is "amazing," certainly that must be the case, otherwise why would all the characters believe it so thoroughly.  Of course, there's no evidence from any episode that Riker's capable of doing more than the most ordinary Starfleet officer, but that's not what matters.  What matters is how many times we tell you Riker's a darned good Starfleet officer.  Because he is.  I just said so.

Captain Obvious is a TV trope wherein the writer strives to engage the reader with interesting sounding exposition which, unfortunately, consists of information the audience already knows.  For example, the way that a map works and what it's for.  And that a fantasy map promoted by an RPG game blog is used for running games.  On a table. 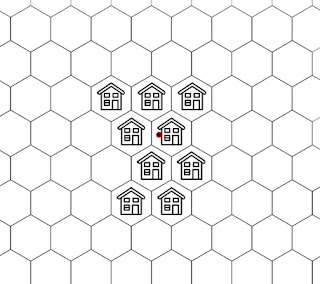 This is a map of Calgary, where I live.  It's a damned good map of Calgary.  It's not a good map for simple things.  It does some shit wrong.  I just want you to see what it looks like.  Also, ignore the fact that it's got no labels.  Pretend I labeled things.

This map is precise.  You can see, within three miles, the exact position of any fucking thing in Calgary.  The map is mechanical.  Calgary is broken down into chunks.  Spaces.  Six-mile hexes in this case.  Thus you can easily plot movement in Calgary without doing a lot of measuring and math.  And that's important, because THIS map of Calgary is used for running games.  For adjudicating travel actions.  It's not for looking at.

Given the precision of this map, you shouldn't have any trouble finding my front door.

Gotta say, it takes some moxie...or chutzpah...or something to state: "this is irrelevant, I will force you to look at it anyway while I explain how unimportant this is." What's even the point?

If you're speaking of my chutzpah, I was asked to write the post.

If you're speaking of the linked blog's chutzpah, I'd say that yes, it definitely takes "something" to write this.

Yes, speaking of the Angry GM. Anger is no substitute for creativity, it seems.

Have some pity. You've created an eyeball-draw and it's making money on Patreon. And so now, it's an important part of your income. But ... unfortunately ... you sort of, well, burned out on the subject. Like the 8th season of game of thrones. What do you do? Do you realise you should have called it quits two seasons ago, or do you wave your arms around and squeeze one more season out of those dried, pulpy lumps?

Thank gawd I have plenty of fresh fruit.

I was going to complain to you that citing the AngryDM prompted me to read that post of his which was a complete waste of my time (and his writing it). I have gained from his writing in the past, but that post is a textbook example of form over content.

I was going to complain, and then it got me reading a few other bloggers whom I've kind of written off since, but had gained something from in the past. From the selection I read there was a lot of hand-wringing about "sandbox" versus "railroad." It seemed to me that no one I was reading was really getting it right.

In the past you've described developing your setting as "tending your garden." I keep quoting those words of yours because I find them evocative of what I think is your method. Your world is your garden and things are happening in it. Things are happening because the entities which exist within it have agendas and are discovering and attempting to overcome obstacles to their agendas.

These other DMs have written about creating plots and hooks. Things that get the players interested in doing something and sketch out what they're going to do. Even among the most "sandboxy" of these DMs, there is such a plot, not a script, they say, but ideas about what the characters might do. The point of their exercise to have reactions in their back pockets. It's still the Truman Show.

They seem to miss the point. The DM doesn't need to know anything about what his players are going to do in advance of a game session. The DM needs to know his world and what's in it and what those entities are up to. What they want. This isn't "winging it," this is playing the world.

Yes. Terms like sandbox were useful to me once, but I feel there's little point in discussing such things further. As I've turned the corner with all matters traditionally D&D. It's fine that others want to rehash and rehash. My inclusion of the map three posts back was merely to point out that the wilderness cannot be grasped with a simplified map. Matt asked me to expand the point and so I wrote the post above.

I'm sorry the link had to be included. I felt I did a good job not rehashing the subject. That has to be done from time to time; and it's better with satire than a rant.

I do better, as you say, to expand how the game world isn't the Truman Show, how it isn't functionally designed to give the players something to talk about afterwards, but in fact is a part of their direct lives.

Appreciate the follow-up. I was reading more into the the inclusion of the hex map in the original wilderness post than necessary, the explanation more obvious than what my mind was searching for.

I'm reminded of the Seinfeld quote...

Newman is the hex map.

*HA* Everything about this post made me snicker aloud. Thanks for that.

Um...is there a reason why your blog is no longer giving off a URL feed? I've missed the last four or five posts because I usually just go through the link on my own blog when I see you've got something new. Your blog link has now disappeared...and when I tried to add it back, I get a message that blogger cannot detect a feed for your site.

Did you turn something off that I missed?

I have no idea what's going on.

I'll concur with JB's feed observation. I use feedly as my aggregator and this post was the last one to be aggregated. I re-addded your URL and all subsequent posts were present. Problem could well be on the Feedly end.