Okay, so there's this: 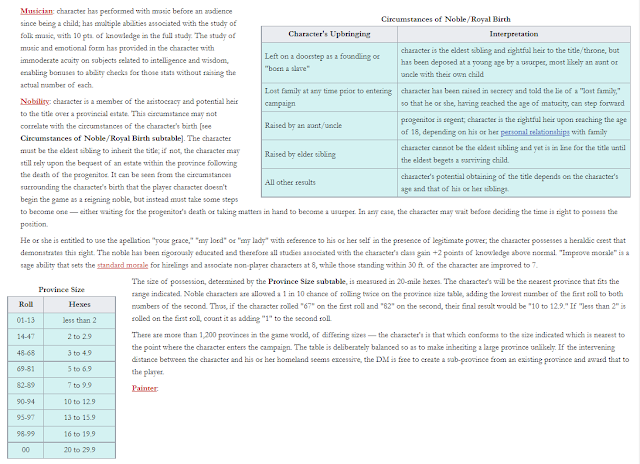 Although on the surface I'm categorically against "balancing" a campaign, as I've discussed before, the above does give me pause.  Is it fair to grant one player a lot of money, potential power, the pleasure of being called "your grace" without having done anything to earn it — except being born to the right parents, with land, and even additional knowledge contributed towards sage abilities?  Is it not, in fact, a bit much?

On the surface, it appears to be.  The chance of becoming a noble is far higher for player characters than the percentage of population would seem to indicate; though of course we're all going to rush to the argument that PCs are "special."  My reasons are more that it's interesting to have backgrounds that are both unique and reasonably legitimate in their chance of occurring.  It is a mere 1 in 200 chance that any character will be a noble, a member of a royal family or in line for ruling a whole kingdom.  That's fairly rare; we don't have to make it 1 in 2000, or 1 in 20,000 just to meet the criteria of demographics.

What interests me is the sort of adventures this builds.  Yes, of course there's the long campaign to get the character whose been kept from the title by a usurper, but in the long run that's just one adventure.  The harder task is to create adventures for the character after he or she has become the Count of Such-and-Such or the King of So-On-and-So-Forth.  Does the character retire, thereafter to adjust laws in the land to suit the player characters?  Or can the players invent plausible reasons why the Queen of Country-X needs to slip off and kill a dragon or two?  Is it all wars going forward, mixed with the horrors of "accounting" and bitterly adding columns of numbers ... or worse, the palace intrigue of Throne of Games?

[sorry.  I know what the title is.  Just saying it could have gone either way]

There are sure to be campaigners who hate the idea.  "Why can't we all just be ordinary adventurers?", they're sure to argue, wanting nothing more than to play the same old game in the same old way.  Thankfully, I'm not bound by this kind of player.  I like the opportunities that a different way of seeing the world offers.

And really, the benefits aren't that much.  The character starts with some nice money — which won't be all that much once the players participate in a few adventures — which can be shared around if the party has a positive, team-structured attitude.  The title is nice, but obviously the party isn't going to use it; if they were asked to do so, that would be quite a joke; and meanwhile, the title's going to get used to help everyone, so it's fine.  The hirelings like the character a bit more, so there's less trouble with hirelings; the character will use his or her knowledge to help the party in general; and the +2 bonus for charisma checks will make this character the front guy when dealing with NPCs.  That's mostly it ... except for the player actually getting power and being able to use it to have the rest of the party executed.

BUT ... that's only an element of a player-vs.-player campaign.  Since I don't allow it, and I'm not going to run your noble character alone, without the party around, I guess you're going to have to see yourself as just another party member.  Poor you.

Since the very beginning of my running D&D starting in 1980, that's always been the baseline.  We're all friends.  We respect each other.  We share.  I must have been busy running D&D when the toxicity of fuck-you-I-got-mine took over the community.  I have experienced it in small packets: game worlds I played in once, and never again — and even, in some cases, for less than an hour before getting up and leaving.  The occasional player I've had online who clearly entered the game with Goggles of Selfishness +4.  No doubt, one has to be wary.  But it is possible to play this game without worrying that making one player a noble will break the party's unity.  At least, between me and my friends.

So ... sometimes I don't know what it serves to create rules like the Background Generator in the present climate.  I like 'em.  The page is 195,446 bytes so far, which would rank 4,744 on the list of longest pages that occurs on Wikipedia.  And I still have lots to go.

Having just watched Our Flag Means Death, I totally agree.

It feels plainly obvious that a noble can be present in the adventure and generate some really fun situations to play out. You get fish-out-of-water stuff, unusual solutions to problems using unusual resources, the opportunity for the party to engage in social circles they couldn't otherwise get into. All kinds of stuff!

As far I've seen having a player being born into the Nobility has led to more player investment and cooperation towards common goals(everyone else at the table benefits if they're friends to someone with influence). Recently, with my PC generation tables I've had 2 that were born grandsons to a Grand Duke and 1 pc that was granddaughter to the Emperor(you cant be born with a title, these rolls are for your family social status). I was really surprised when those came up because the probability was really low: 1 in 100 to be noble, and then another 1 in 100 roll for Emperor status (grand Duke is slightly more likely), but the effects at the table have been extremely beneficial.

Though on the other hand a high number of pcs have been born to slave families, more than probability would suggest. I guess the sample size isn't that large, only like 3 dozen.