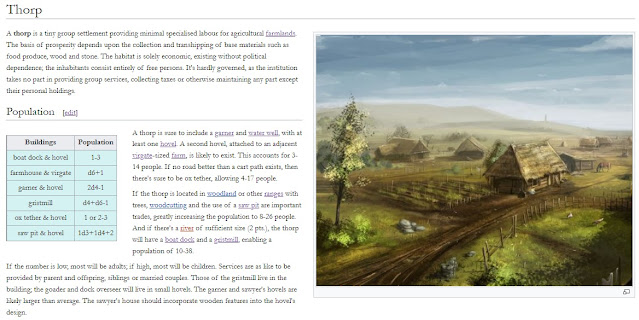 I'd imagine this would drive many traditional D&D players crazy.  They'd see the rigidity of the concept as incredibly limiting, though obviously it's anything but.  Whereas we're usually given a rough population figure, say either 20-80 people or fewer than 20, here we have detailed numbers that dictate a thorp might have anywhere from 3 people to 38, accounting for things that might exist.  No river, no dock, no mill.  No trees, no sawpit, no woodcutters.  Hell, no farming, no anything, except perhaps a well.  One that's natural, of course.  No point in sinking a well if there's no one around to draw water.

Everyone has a reason to be here.  Thus, if the players are here, they know what those reasons are ... and the very nature of the thorp defines what benefits the players might derive.  They can barter for food here.  They might be able to catch a boat here.  They can get a sack of grain turned into a sack of flour, all at rates far below city prices.  The party can make arrangements to bivouac here with their tents, more assured than usual that they won't be harassed.  They can make friends here; find a servant here, if there's a youngster older than 14 who's desperate to get out and see the world, all moon-eyed at these players who've been to the big city.

It's a useful place.  And they're scattered all over.  If I go back to the original sentiments for this blog, it's a place that offers the players the opportunity to build something.  Not that they should assume the locals are pushovers, just because they're isolated.  Any one of these might be an ex-soldier, whose seen and done things the party hasn't yet.  It's not a good idea to push around strangers.  You don't know where they've been.

For me, I like seeing the hammer concept come together.  Collect the individual parts, fold them together and create a thorp.  Collect more parts and make a hamlet.  Collect more and make a village.  Keep going, right up until we're building palaces.

Hope I can do that.  Some of these descriptions are really going to tax my imagination.

I've gotten into the habit of visiting the Wiki right after work to check out the recent changes. As a result I'm treated to some of this news before it's posted here. ALWAYS whets my appetite for the additional bits you drop in the blog.

My party has willingly accepted that thorps are a major part of their interaction with the world. This means no pubs/taverns/inns .... no blacksmith on every corner ... no wealthy patron/village leader/local governmental leader passing out adventure hooks in the town square. But as you mention food can be found, assistance is available and with a modicum of thought hooks may abound.

Loving these treats. Also enjoying the map blogging and the methods and approaches it espouses/shares.

As your players are clearly enjoying the work, Escritoire, hit them up for a general monthly donation to my patreon: $1 apiece. Heh heh.

I haven't commented in a while, but I've been reading and wanted say, please keep going with the facilities work you're doing. It's both helpful and inspiring.

In the past you've mentioned whether and how readers apply what you write, so I want to share that I've been building out my own infrastructure & facilities mapping. Here are a couple of pictures showing elevation and counter data, as well as modern infrastructure for reference.
http://www.moondogsoftware.com/pictures/Screenshot%20from%202022-12-07%2012-38-55.png
http://www.moondogsoftware.com/pictures/Screenshot%20from%202022-12-07%2012-39-54.png

My next bit of fun is automating the distribution of infrastructure indexes across my 18-mile grid and assigning hex types for the 6-mile grid.

Thank you for working on this and sharing it!

Sterling, might I ask how* you generated those lovely contour line maps? as Alexis said: so pretty!

*and by how I mean more what you used

There's something to be said for how much difficulty I'm having trying to find information on what a Thorp is online, outside of your wiki.

Per Wikipedia, "A Thorp is a hamlet"
What's a hamlet? "A hamlet is a village"
What's a village? Well apparently a village in India can have up to 500 people, but I think it would be categorically false to describe somewhere that houses 500 people as a Thorp. Plus all of these pages are really giving me modern definitions of what these place names mean anyway.

Hilariously or embarassingly, if you google "the population/size of a thorp" you get "in D&D, it's a population of 20-80 people" (supposedly this figure doesn't include children)

It bothers me that this information isn't more readily available. I may be looking in the wrong places but I will spend some time looking further.

Even so, nothing in what I've looked at online even comes close to describing a Thorp. Yours is such that an artist could use the description on your wiki to paint a picture.

I bumped against the same wall, Prof. Thankfully, I've been in dozens of thorps, so I have the benefit of personal experience.

DM's Escritoire, I know that's a joke, but this is the internet and that's something we don't joke about.