I continued to work on maps this week, mostly on calculating the areas of additional provinces, since there are a lot of grayed out places on the 'Cities' list.  I finally succeeded in reformatting all the city files for the Wiki, but since the area data is missing there isn't much point in publishing it.  The updated tables for world population and area, and for regions, can be found at the city index page.  At present, the world has a population of 116,092,588, and a measured area of 12,313.7 hexes.  In square miles, this would be roughly 3.8 million, or the size of Canada.

I have published a few city lists which are complete.  Namely, Cumana, Milan and Moskva.  Cumana is a half-orc client kingdom in what would be eastern Ukraine in our world - one only has to imagine that the Cumans were orcs, and were never fully defeated by the Kievans ... the two races then interbred.  The Dworkin colony is in the Donets Hills ... these are slightly different from ordinary half-orcs in that they are shorter and heavier.  Players playing dworkin characters still subtract 2 charisma, but instead of adding a point of strength and a point of constitution, they add 2 points of constitution.  At any rate, Cumana can be found mostly on this map (labeled twice, which is an error - ah well, fix it later).

Moskva is, of course, Russia.  Both it and the maps for Milan have been posted on the Wiki.  Enjoy finding them ... heh heh heh.

But very few of you are here to look at cities.  For monsters, I updated the Presence and Encounters tables to match the Biology table I posted about a month ago.  This means that all 0 to 1 intelligence creatures have been created, as well as canines and felines with 2 intelligence.  You can find the latter at the bottom of each table, highlighted in yellow.


Things get more complicated, as creatures with 2 intelligence may be encountered in four different ways.  So far I have a mere 16 different types of encounters for which a monster must have at least a 2 intelligence.  But this is only a beginning; there are other 2 intelligence monsters - of course - which I have not yet added (I will do more in the next few weeks).

Apart from cities and monsters I've continued to add maps east of the Caspian Sea: Kara Kum, Turkestan and Hindu Kush.  Pay special close attention to the bottom of the Turkestan map.  'Kabolistan' on that map corresponds roughly to the eastern part of Afghanistan; the city of Kabol appears on the very bottom row of hexes, towards the right side.  Note how the centre of that region forms a lower plateau amidst very high mountains on all sides.  The reader can see how high those mountains become on the Hindu Kush map; the unmade portion is extreme western Tibet.

Finally, I've updated the Germania map again.  It is slow going, as each region I work on with this map is complicated and difficult to sketch out.  Compare the changes to where it was last week: 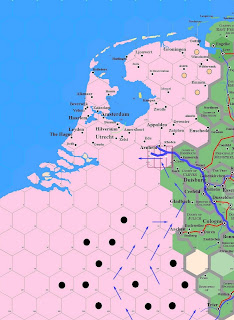 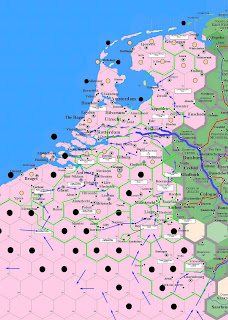 This is about as cluttered as the map gets.  After this point I start cleaning up the notes and smoothing out the coloring, and it becomes easier on the eye.  I messed about for quite awhile before getting a color scheme that was comfortable to look at, but still gave the necessary information.  Aesthetics are important.

This is one of the reasons I like working on a graphic design program, and having complete control of a map I make myself.  Last week people asked me why I bothered, why I didn't just use an existing map.  The answer: flexibility.  With my own map, where everything is a constructed element on the program, I can change any element I wish, whenever I wish, without having to re-pixillate someone else's imagery.  Believe me, this is greatly needed.

As well, if you haven't considered learning how to use Quark or Publisher, I would point out how I can make many little notes on how I'm going to color this hex or take that river, right on the map, so that I'm not dependent on my memory for each feature.  I can work on all the features at once, graphing them in general, before going in and microdesigning each one.  For myself, I keep it relatively simple - this looks a mess, but it really isn't too bad.  Admittedly, these little tiny states of Europe have raised some signficant bumps on my forehead, and a slightly grooved place on my desk; but a little sanding should sort both out.
Posted by Alexis Smolensk at Monday, January 10, 2011

As someone who does look at the cities, I have a question.

With Nobility largely being tied to the size of land, etc. I had a touch of confusion.

The Margravate of Saxony, Margrave being to my incomplete knowledges slightly lower than Duke, is much larger than any other territory in the region, in terms of both population and hexes.

Am I wrong in my rankings, or does Saxony have a special history I was utterly unaware of?

Titles being hereditary, they did not always change as a territory got larger. At some point, the Margravate of Saxony was small compared with other states, but with victories, acquisitions, marriages and so on, the size of a small Margravate can become much larger than a dwindling Dukedom.

Whenever possible, I attempted to find the title in use in that territory in 1650; many of these titles were different later on, or before, depending on the poltical control. Since Saxony was consumed by the Margravate of Meissen in 1423, the two states becoming conjoined, and because I have no distinct title for the territory otherwise from my research on the net, for my own simplicity I chose to name the inner territory the Margravate, and the overall territory the Electorate (it helps me keep them separately identified).

You do understand that I don't sit down with upteen detailed books on the titles of late Medieval germany, right?

Oh no, I didn't imagine anything like that. Your world is complex enough without trying to ensure that every inch corresponds to some no-doubt inaccurate listing from the 1600s.

That particular instance in that particular set of results just caught my eye. It did not fully occur to me how enormous the disparity between the title and the land could be.

That particular anvil had not left a lump on my skull beforehand, is all. C'est la vie.