I wasn't sure about posting this, but hey ... can't be all book all the time, can it? 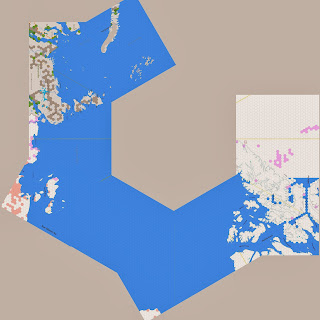 Last month, when taking a break from writing, I needed to do something fairly mindless, fairly structured and pre-determined ... and for a long time, I've thought about just working through all the parts of my world and JUST doing the coastline. So what you see above is the beginnings of that effort.

This would be the circle around the pole. It's as far as I've gotten in this effort, and at the moment I've gone right off doing this task. I'll leave it for awhile before picking it up again, and therefore I might as well post it in the partly done state that its in. Sometimes, this blog works like a diary.

The pole itself, well, that's almost all ocean. There's a bit of Ellesmere Island that pokes into it, and a bit of Greenland; Greenland is unshown, it will fill that white square at the right, that shows pink hexes on it. The cut off line is based on the most northerly point for which I have an elevation, the town of Alert on the north coast of Ellesmere. If you look closely, in the middle of the white square for Greenland, towards the center of the map, you'll see one pink hex. That's Alert.

That mess that's mixed blue and white, that's the northern islands of Canada. One can make out the northern edges of Victoria and Baffin, and all the relevant coast for Ellesmere is done. Devon, Melville, Axel Heiberg, Bathhurst and a host of other islands are done too ... but I haven't finished putting the nice blue shading that surrounds all the coasts here yet. It's only a few hours work, but like I say I've gone right off it. For the next while I'll be doing something else to relax between writing. Probably something to do with trade tables.

That's Siberia off to the left. Much of it was already done, as early efforts had made all the parts that are shown with grey and green hexes. Still, reformatted a few things, and there would be other work to do there, to get it up to the present layouts that I employ. All my maps go through constant upgrades, as I slightly alter colors, design and so on, which gets begun every time I have to upgrade my Publisher program. Real pain in the ass, actually, even though the maps DO look better.

Oh, I should also say that bit of land at the bottom of the map, that's a bit of Alaska.

This is the first time I've mapped any part of the New World. Big empty nothing, really. Don't know why anyone would bother going there.

Each map is 35 hexes by 30 hexes. Each hex is 20 miles across. There are nine maps shown here. I'll add a blow up of the messy partially done map of the coastlines around Devon Island in Canada - just because there were A LOT of coastlines. All told, between 60 and 80 hours work.

Anyway, it's a very, very big world. We just use such a tiny bit of it.
Posted by Alexis Smolensk at Thursday, December 12, 2013

Email ThisBlogThis!Share to TwitterShare to FacebookShare to Pinterest
Labels: Maps

Big empty nothing ready to be claimed for whoever has the ability to get there.

So how do you go about getting the outlines of the coasts? Are they hand drawn? Is it a layer thing, with the coastlines coming from something like Google Maps?

It's goddamn fascinating, regardless.

Google Earth is a map projection just like any other; the appearance suggests 3D, but in fact it is 2D ... and it is a different projection than my compressed hex-map representation.

So what I do is trace small parts of Earth's coastline off Google Earth, creating a line in Publisher; this is then bent, extended or very occasionally fudged - the last only in respect to that difficult 60-degree bend in the hex-map projection. The lines are linked together, overlapped really, so that the coastlines appear seamless. Then a second line is laid under the darkblue coastline and stretched into a shape that produces the sea blue color on the map, without any border so the edge disappears; these are then laid over each other, again to make the sea look unblemished. Finally, the hexes themselves that have no land in them, or in which the land does not flow over the hex, are colored like the sea with borders of the same color as the edge of sea border.

The trick is in which shape overlays what shape, to produce the illusion of land and sea.

Hm. When I say 'small', I mean between 20 and 60 miles long. Pieces tend to be smaller when there are a lot of fjords, since one side of the fjord must be done as a separate line than the other. Thus, the above map is about 300 individually created and adapted coast line pieces.