A Cathedral as Dungeon 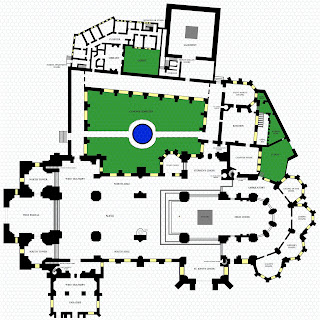 Just for fun, I've been putting together this map of the actual Sankt Paulus Cathedral in Munster, Westphalia, Germany.  The image above has it superimposed over a hex map, the hexes having a 5' foot diameter.  Sadly, because the Cathedral was bombed during World War II, I had to consider that changes that were made since 1650 (my world's existence) as accepted for the campaign's use.  I've also made a few other changes to make it more 'game-worthy.'

For perspective, you can find a tiny dot to the left of the Altar Isle in the right center of the Nave.  This is the size of an actual person.

Incidentally, this is the church used for this part of the online campaign.
Posted by Alexis Smolensk at Saturday, February 04, 2012

Email ThisBlogThis!Share to TwitterShare to FacebookShare to Pinterest
Labels: Settings

It looks gorgeous even only in 2d. And having one of my college art reports being on St. Pauls, I know it's probably amazingly beautiful inside.

Of coarse, that doesn't take into account all the little oddball places they have on the other floors as well. Maintenance access, spaces left open after construction and the like.

Church construction really is quite interesting when all is said and done.

I could not find any information on the second floor, even from the German wikipedia article translated into English (which had a lot of info). I presume there is one, but if its to be added, I'll have to invent it.

The basement floors, obviously, need not have anything to do with the real world.

I always pick up a floormap when I visit a cathedral, for just this purpose. Haven't had call to use any of them just yet, though.