This is pretty nerdy.

But I can’t help it. So here goes. 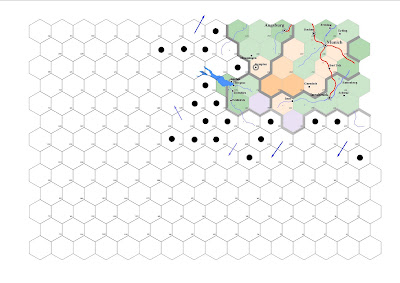 Take the above hex map. This is a selected corner of the full map, as it looked Wednesday afternoon before I got started on it. The colored area is the southwest corner of Bavaria, that I finished about 18 months ago. At that point I began mapping towards the southeast, following the Dalmatian Coast to Greece, then Turkey and the Middle East.

But having finished the research for Switzerland, I thought I would add that in, as I already posted. Looking at it in retrospect, knowing that the region has to go in west of Bavaria, it doesn’t look large enough to fit.

The circles and arrows are notes for the direction of rivers or which are the high hexes as opposed to the river bottoms. They tend to change as the map gets designed. The numbers in the corner of each hex refers to the altitude. 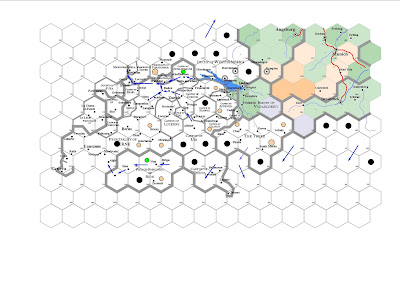 Now here is where I was before going to bed Wednesday night. As you can see, Switzerland fit. I always begin with mapping out the location of the cities and add in the borders. As I said, a major headache. I apologize for the last letter on occasion being dropped off, or the last word being gone entirely, as when the program transfers the data to jpeg, it randomly loses some of its integrity. I have to mess around with it for an hour or so to make that perfect, but since the map isn’t actually done (even now), I didn’t bother.

Note that the Principality of Berne extends from the western border of Switzerland through the heart of the country to Lake Constance in the north. Berne in the 17th century had occupied what would later become the cantons of Vaud and Aargau…and was the central power of the Swiss Confederation until Napoleon.

Where it reads “The Three” that should read “The Three Leagues,” which was a wholly independent state, where all decisions were made by meetings among the communes. I probably found that the most interesting thing.

Thursday’s pic of the mountains can be found in the hex south of Lucerne, in the Canton of Lucerne; the direction the pic faces is south. 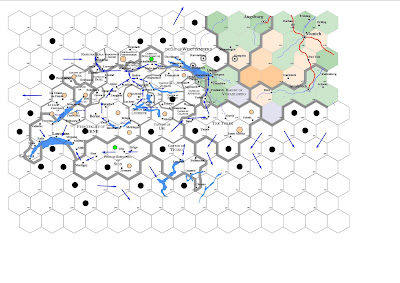 I started today with adding the multiple lakes that decorate Switzerland. This is the part I hate the most. Each lake is carefully traced from the map and then skewed to fit into the hex map, and this takes some time. But I have to admit, when they are completed, they look beautiful…the most hated part and the part that makes the map what it is.

Some of the cities will have shifted marginally to locations which better reflect their relationships with one another. So too with various borders, if you compare the second map with the third.

This is as messy as it gets. At this point I begin removing the various notes with the intention of drawing out the rivers, finalizing the pertinent elevation of each hex, and generally tidying up any rough aspects of the map. As well, occasionally there are still changes; the river on the east near Thusis does not actually flow south, but instead flows into the Rhine near Chur.

Once the altitudes are defined, I can color the hexes and that helps get a topographical sense for the country. Thus: 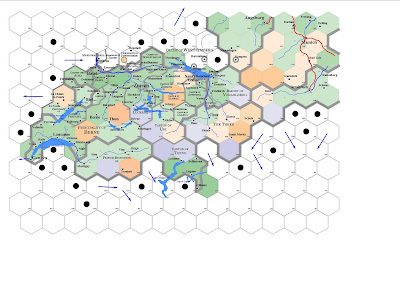 Here the rivers are drawn and the hexes colored. There is some generalization, due to the size of the hexes--20 miles diameter. With an area like Switzerland, the size of the hexes creates a serious distortion--smaller hexes would better show the mountain ranges, while the large hex doesn’t very precisely. What is important to me, however, is the altitude of each hex in terms of how it affects (or limits) travel.

So, Thun may be surrounded by mountains in reality, but it is easily accessible from Bern. And we must accept some limitations.

This isn’t finished. Sadly, there are mountain peak references to be added (another headache) and, of course, roads. But I won’t be adding those until I finish Germany to the north and at least some of Italy to the south. And probably eastern France. All of which takes awhile, mostly to research it before finishing the map (as you see, I did this in two days)…and I like doing it.

Let me know what you think.
Posted by Alexis Smolensk at Thursday, January 29, 2009

Email ThisBlogThis!Share to TwitterShare to FacebookShare to Pinterest
Labels: Mapmaking

I really like the combination of utility and aesthetic appeal of your mapping. Maybe I missed this in an earlier post, but have you discussed what program(s) you use to create your maps?

It's extremely impressive. Like sirlarkins I'd be interested to know at a more practical level how you make your maps. I think you mentioned it in an earlier entry, but can't be sure.

Awesome work. I enjoy seeing pictures of your maps. They look good and convey a ton of information pretty easily.

You're right, I should be more precise.

I was going to add my reply here, but I thought I might want to edit it once its published. So I included it as its own post.

Hi,
when is the date of your map?
If it's before the Italian Wars Canton Ticino should be a bit of the duchy of Milan, and if it's after, well, it depends :)

"In 1512 Locarno, the Maggia Valley, Lugano and Mendrisio were annexed. Subsequently, the upper valley of the Ticino River, from the St. Gotthard to the town of Biasca (Leventina Valley) was part of Canton Uri.

The lands of the canton of Ticino are the last lands to be conquered by the Swiss Confederation."

My world takes place nominally in 1650 (but I don't obey every historical idiosyncracy).